CAPTAIN OF THE GUARD. 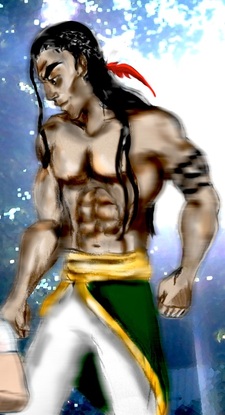 ​
Rowkey is Nuccteem’s older brother. He also lives in the Native Reserves along Lake NeeCee. To most people, Rowkey appears  to be stand offish. He puts onthis tough exterior because he lost
his son to the locust, the samecreatures that nearly claimed
Prince Riviairra’s life while he was trying to protect Princess Katia in The Fields of Polina. In this aspect, Riviairra reminds
​ him of his son which is why he is so hard on him.

Rowkey was once Captain of The Guard at
The Sub-Regions Capitals Kingdom and has great
insight on direct hand-to-hand combat  and
weaponry becoming Prince Riviairra’s
and later Prince Brahms’s trainer.

Once Rowkey re-encounters The LIGHT, his hair
grows longer and turns white as snow
greatly increasing his strength.

"You are a hard head Young One. We fight with honor. Not for pleasure. A True Warrior, becomes one with The Most High. Only then can a Man Cub become a True Man. Have you not learned when The Locust nearly claimed your life? Fighting in your own strength wAsn't enough. At all times, one must have a pure heart and not lose sight of The LIGHT. To not be a lover of violence but a maker of peace.  To embrace the very essence of life. To appreciate the human spirit within. And remember, WE ARE AT WAR! Never pick up your sword without The LIGHT Young One. Least you  perish by the sword."